Investors took long positions in all Asian currencies for the first time since early September, a Reuters poll showed, as they bet a Joe Biden presidency in the United States would foster more stable trade and foreign policies towards the region and Beijing.


(Reuters) - Investors took long positions in all Asian currencies for the first time since early September, a Reuters poll showed, as they bet a Joe Biden presidency in the United States would foster more stable trade and foreign policies towards the region and Beijing.

With U.S.-China relations at their worst in decades over disputes ranging from technology and trade to Hong Kong and the coronavirus, a Biden administration is expected to take a more measured and multilateral approach, which could clear the way for a recovery in Asia’s virus-hit economies.

“Biden’s presidency may bring a fresh chapter to U.S. foreign policy ... The tariff-led trade negotiations and retaliation may be replaced by a more diplomatic and strategic approach to deal with U.S. trade deficits,” Margaret Yang, a strategist at DailyFX, wrote in a note earlier this week.

Bets in favour of the South Korean won outpaced those in its peers and stood at their highest since early July, 2014, while bullish positions in the Chinese yuan and Singapore dollar strengthened, the fortnightly poll of 16 respondents showed.

The won is now among Asia’s top performing currencies this year, benefiting from recent data pointing to stronger exports.

How Asian currencies have fared since the U.S. election 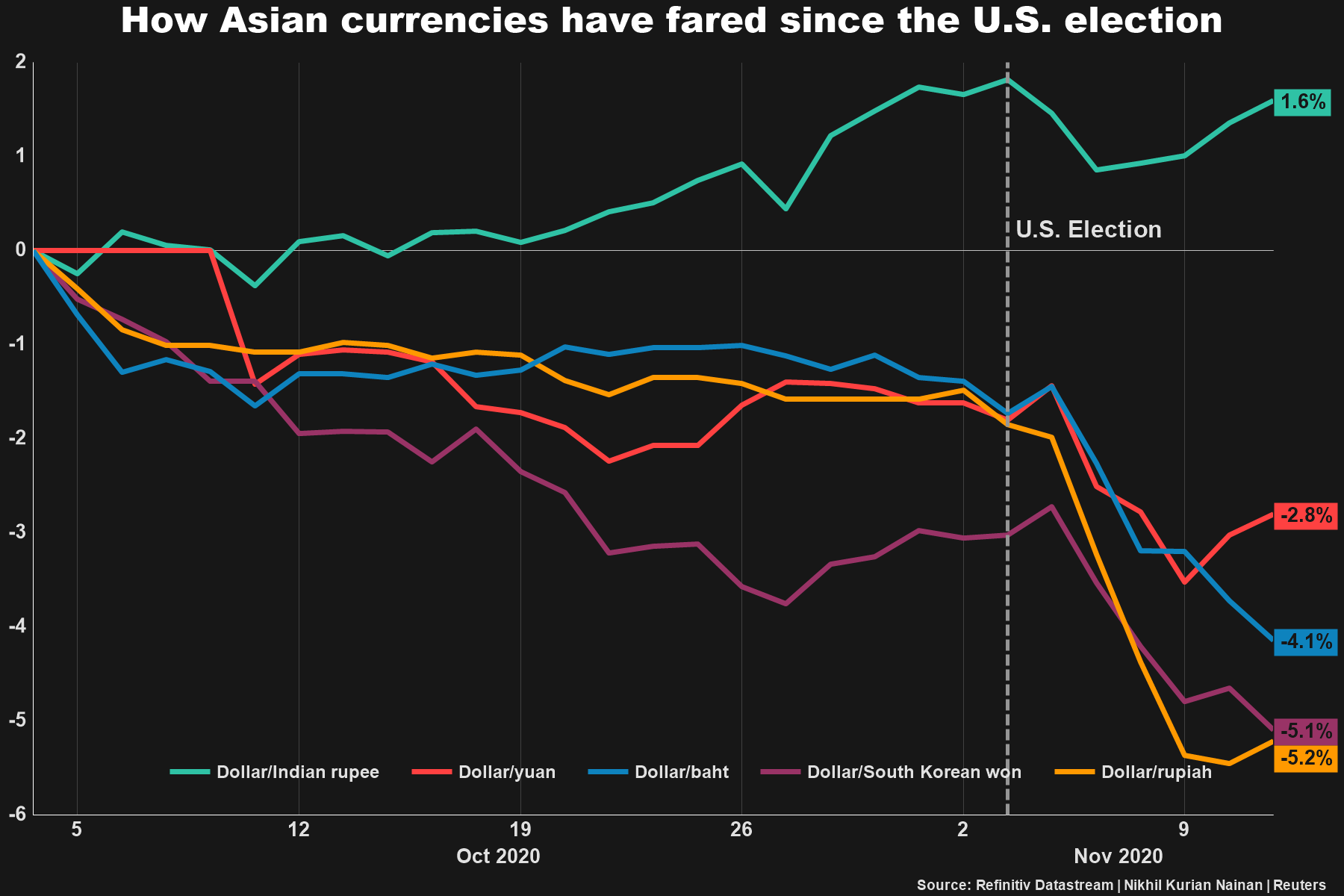 Sentiment towards the Indonesian rupiah reversed, with positions now turning bullish after more than two months.

Concerns over central bank independence had pressured the rupiah earlier this year, but the currency has rebounded sharply since the U.S. election as a drop in U.S. bond yields led investors to push funds into Indonesia’s high-yielding debt market.

Bets on the Thai baht turned firmly bullish, climbing to their highest level since late January.

The currency hit a 10-month peak on Wednesday, driven by capital inflows as promising developments over a COVID-19 vaccine boosted prospects for the economy and its key tourism sector.

While market participants still held long positions in the Indian rupee, sentiment towards the currency remained the weakest in the region despite massive dollar inflows into the country’s equities.

Government sources last week confirmed the Reserve Bank of India (RBI) would continue to buy U.S. dollars to prevent rupee appreciation and that authorities were keen to keep the rupee competitive to help provide an export boost.

“We expect the central bank’s intervention could continue and reserves would increase at a steady pace ... Strong inflows via FII or FDI are likely to keep the rupee stronger and at the same time the RBI will be on guard to curb any major appreciation,” said Gaurang Somaiya, forex analyst at Motilal Oswal Financial Services.

The poll uses estimates of net long or short positions on a scale of minus 3 to plus 3. A score of plus 3 indicates the market is significantly long on the U.S. dollar.

The figures include positions held through non-deliverable forwards (NDFs).

Reporting by Shriya Ramakrishnan in Bengaluru; Editing by Rashmi Aich