Amounts to just $1.85b due to travel disruption caused by Covid-19 pandemic

KARACHI: The inflow of foreign direct investment (FDI) into different sectors of Pakistan’s economy fell 28.9% to $1.85 billion in fiscal year 2020-21 primarily due to the global travel disruption that prevented foreigners from visiting the country for investment purposes.

According to data released by the State Bank of Pakistan (SBP) on Friday, the foreign investment in Pakistan had stood at $2.6 billion in fiscal year 2019-20.

Speaking to The Express Tribune, Economist Muzammil Aslam said that the main reason behind the drop in FDI was the Covid-19 pandemic. He added that the number of foreigners who visited Pakistan in the last fiscal year nosedived on the back of global travel restrictions, hence the volume of direct investment declined as well.

“FDI increases when foreigners land and explore business opportunities in the country,” he said. “Covid-19 led to the closure of borders and travel curbs in many countries which, in turn, restricted the number of foreigners who were eager to explore and invest in Pakistan.”

He pointed out that the malady had a substantial effect on the international business environment due to which less foreign investment entered many countries and Pakistan was one of them.

“If the bigger picture is considered, the whole world was in trouble, hence many foreigners were unable to invest in Pakistan,” he said.

“Travel is direly needed for greenfield investment and with restrictions in place, it was bound to fall,” he said, adding that business travel dropped to very low levels during FY21. On the other hand, Intermarket Securities Head of Research Saad Ali highlighted that foreign investment in FY20 was on the higher side due to massive payments made by telecommunication companies for the renewal of their licences.

“Due to this, the biggest decline in net FDI during fiscal year 2020-21 was witnessed in the telecom sector,” he said.

He added that the FDI also fell during FY21 due to a high base effect, aided by hefty investments made by telecom firms in FY20. The research head noted that the FDI in oil and gas exploration decreased because many multinationals in the sector wrapped up their operations in Pakistan. 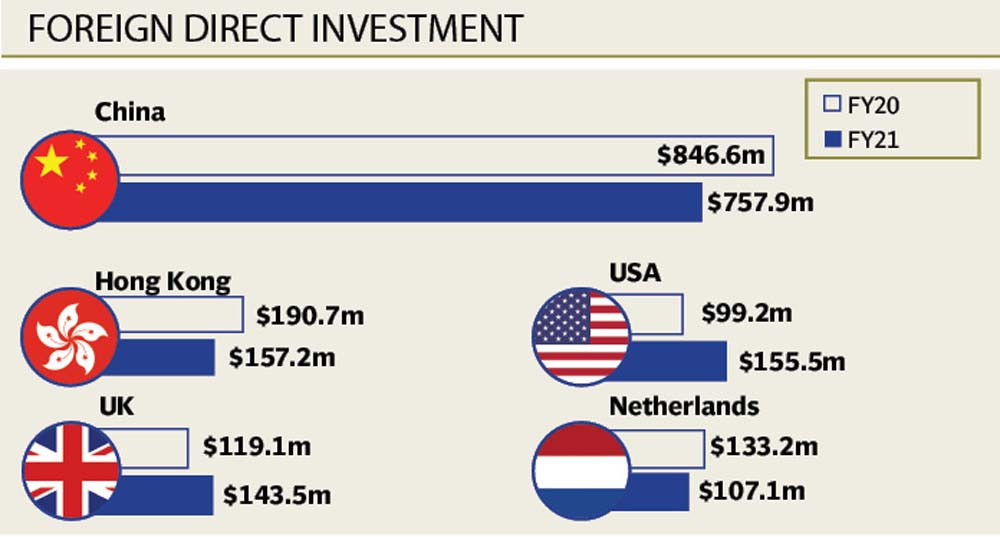 Textile industry fared no better as foreign investment in the sector declined from $37.7 million in FY20 to $6.9 million in FY21, a decrease of 81.6%.