Ahead of the next UN climate change conference (COP27), UNCTAD has underscored the growing urgency of shoring up investment to combat the existential threat facing humanity.

“Innovative ways and means are needed to foster public and private partnerships, improve the enabling policy frameworks and build capacity for preparing pipelines of bankable and impactful projects in developing countries,” the report says.

Previous estimates indicate that annual climate adaptation costs in developing countries could reach $300 billion in 2030 and, if mitigation targets are breached, as much as $500 billion by 2050.

The report analyses investment policy trends related to climate change sectors between January 2010 and June 2022, during which 103 policy measures were adopted worldwide.

It finds that policy initiatives to promote climate change mitigation and adaptation through FDI focused primarily on the renewable energy and electricity sectors, which account for 60% of the total measures.

Although renewables play a key role in the transition to a low-carbon global economy, the report emphasizes that other mitigation policies – such as energy and resource efficiency technologies and other environmental technologies – also need to be promoted.

“Moreover, climate change adaptation-related sectors need to be defined on a country basis as vulnerabilities and priorities differ nationally and locally,” the report says. 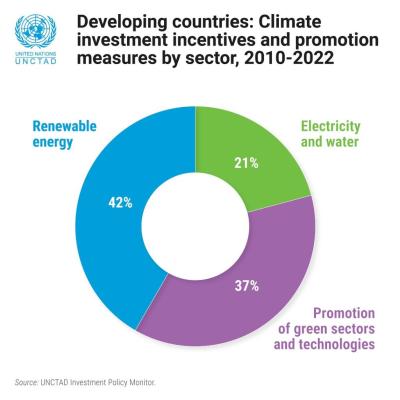 The report highlights differing concerns between developing and developed economies.

In the developing world, 30% of the investment policy measures related to climate change sectors aimed to liberalize water and electricity sectors, mostly through the unbundling of the energy market or the privatization of state-owned enterprises.

An additional 43% of the measures sought to promote investments in those sectors through incentives and investment facilitation – such as incentive schemes aimed at reducing the carbon footprint of the energy sector and that of industrial and agricultural production.

The report shows that in developed countries, three out of four policy measures had to do with introducing or widening FDI screening mechanisms, confirming the trend towards heightened national security concerns observed by UNCTAD in recent years.

“The global environment for international investment changed dramatically as a result of the war in Ukraine, which occurred while the world was still recovering from the impact of the [COVID-19] pandemic,” the report says.

“This trend is likely to continue in light of the energy security concerns raised by the war in Ukraine and its impact on energy supply and prices,” it notes.

The report shines a light on the challenges of channeling mitigation investment into developing countries and upscaling adaptation investment through viable business models.

It advocates for strategies that comprehensively address energy issues such as security of supply, efficiency, affordability and environmental sustainability, while addressing the development of climate change mitigation and adaptation sectors and technologies.

“Climate change strategies should embed investment promotion as a key component and communicate the government’s priorities in the medium and long run,” the report says.

“In parallel, the targets arising from the comprehensive climate change strategy should be embedded in investment promotion strategies to inform the activities of the actors involved.”